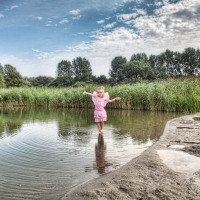 This entry was posted on Thursday, August 29th, 2013 at 16:07 and is filed under Experimental, HDR. You can follow any responses to this entry through the RSS 2.0 feed. You can leave a response, or trackback from your own site. 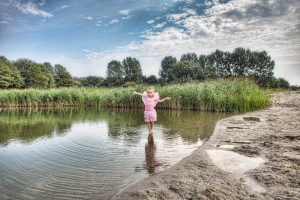 Again my daughter and I went outside with a new idea which included our little stool. This time we went to Geestmerambacht with the intension to make a fairy version of our floatation series. While we were shooting next to the lake, with lousy light and hazy skies we came to the idea to place the stool underwater, just below the water level. For a little five year old a bit scary to be on a small stool that isn’t visible but at the end all went well. She was walking on water.

For those who have missed the previous series where we have already developed the floating or hovering concept I wrote a brief tutorial (to be found here) how to achieve this special effect. If you understand how this is done there are many ideas that you can execute.

You can use the same technic when you want someone to walk on water. In our case we placed the stool in such a way that it was just below the water surface. Due to the ripples in the water the stool was visible in some cases, but that could be fixed easily. More on that later.

In the examples below I never shot a photo without the stool. Due to the fact that the stool was underwater, there was no need to hide/remove the stool. So my base photo is with stool. 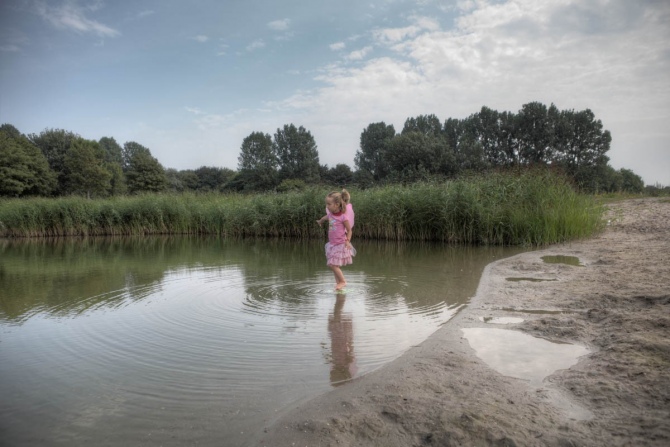 Because it was not a very sunny nor bright day, (lousy light and hazy sky) I thought the image was lacking something. There is no umpf. So I decided to spice the image with some HDR. I only had I photo so I had to multiply the image. I created 7 different versions with Adobe Lightroom all with 1 stop difference. (-3, -2, -1, 0, 1, 2, 3 stop). I exported these virtual copies to Photomatix and gave it the minimal adjustments. No changes on the contrast of vibrance. I just made sure that the whole range of lightning was touched. Unfortunately the white clouds were lacking any information so they stayed white. See below for the HDR. 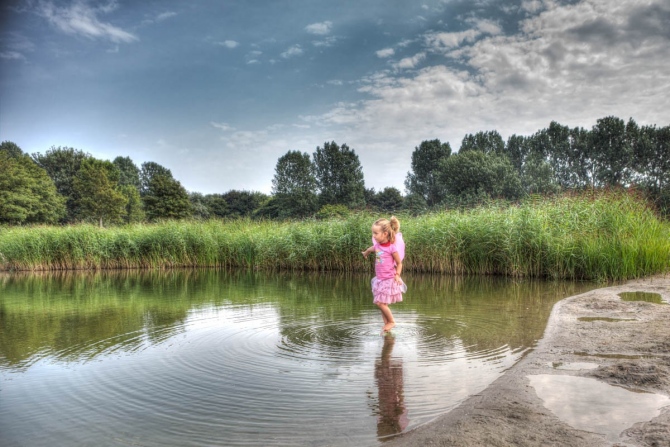 This photo was still missing the umpf that i was looking for, but that wasn’t a big surprise because I didn’t touch the controls for contrast and vibrance. Programs like Photomatic tend to loose it when it comes to color and contrast. So my preferred tool for that is Adobe Photoshop (or if I am in a hurry, Adobe Lightroom).
After some tweaks in Photoshop I came to the end result which you see here below. As a final touch I brushed away the little bits of the stool that were showing thru the water surface. 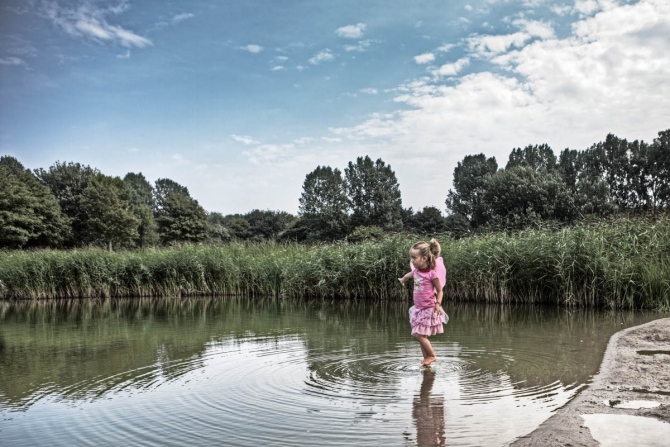 If you want to see the other shots of that day, have a look in the gallery – Water walk