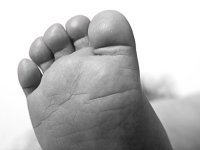 Did a new studio shoot last weekend with Mick. And again, learned a few new things about shooting kids. Had to do a lot of retouching due to the fact that I used the small background paper. My initial thought was – small kid, small background, but a little 3 months old will not listen to any directions, so you need to have enough room to play in. Ergo, a bigger background would have given me more playground. And will prevent a lot of Photoshop work afterwards. Another lesson learned was that I need more time. As soon as the little rascal decides that it is enough, you have to listen. And a curious Nickita to my side wasn’t a good idea either. All that Mick did, was observing Nicki and he did not pay any attention to the camera. So we already talked about a new date for a more relaxed photo shoot. And this will take place at Mick’s house, so if he decides that it is enough and he gets tired, this won’t be a problem. Overall I am more then happy with the results. So I placed a few examples in the gallery. [Canon 5D, 24-70mm, Soft box, Standard flash head, silver reflector]