This entry was posted on Tuesday, July 24th, 2007 at 23:10 and is filed under Photo Ops. You can follow any responses to this entry through the RSS 2.0 feed. You can leave a response, or trackback from your own site.

Previous: Organizing your photos (part 3)
Next: Roma and Firenze 2007 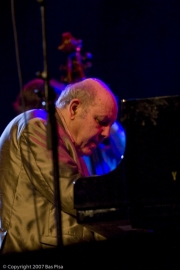 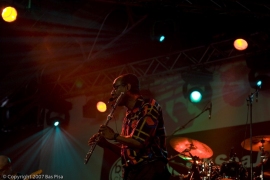 I went to the North Sea Jazz Festival 2007 in Rotterdam. On Friday and Sunday. On the Internet there were a lot of warnings not to bring a professional camera. So stupid me, listened to this advice. And there I was watching and listening to these wonderful acts. But no real camera. Completely surrounded by other people who did bring their dSLR cameras. Okay not real big lenses (besides the press-photographers) but still they did bring their cameras.

So I decided that I had to take my chance and go again. Bought tickets for the Sunday and two days later we were standing with my Canon 20D at the entrance of North Sea Jazz. And no security check at all.

I left my big lens in the car and started to play with my 50mm f/1.4 to see what result I would get. Luckily I was able to walk all the way up to the stage and enjoyed Ronald Snijders.
After a funky show we decided to go back to the car and get the ‘big’ lens, my 70-200 1:2.8. Again no checks at the entrance and I was able to get through the gate with no problems at all.

Then the fun realy started. We went to The Misha Mengelberg trio, and I managed to get my first shots from a nice distance. Still fumbling to find the right settings, but at least I was able to take some decent photos. There was a short moment of panic when I saw the security guard approaching a ‘colleague’ photographer and told him to move out of the way. So for now I stayed on my seat and enjoyed the jazzy sound of Misha. Then we were hoping to go to Amy Winehouse, for the second time this year she decided that she would enjoy the house-wine more then a visit to Holland. So she decided to stay home. So we visited some other acts but it was not what I was looking for. 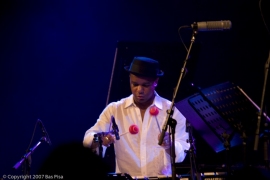 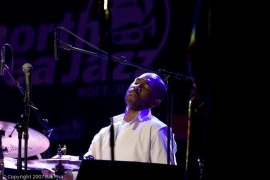 Until we walked in to the SFJazz Collective. That was nice and had an excellent sound. And managed to get our mood back into the right state. With this act I thought it would be nice to be a little bit more bold and I decided to get all the way up to the front. Right in between of the press photographers. As this was allowed for three songs or 20 minutes max, and shot as much as I could. I had a great time, and my mate managed to get a good seat so even after the 20 minutes passed, I managed to get a good spot to continue shooting. 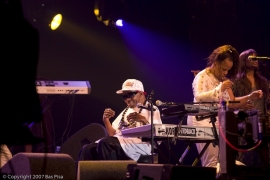 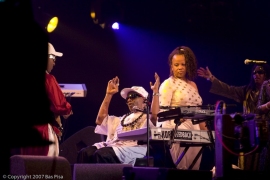 I have to admit that I did not know the name but when I heard the music I started to recognize some songs. Unfortunately we were standing all the way on the left so I did not get many changes on a good shot. 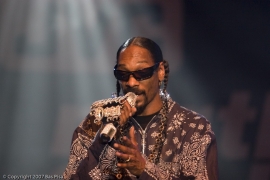 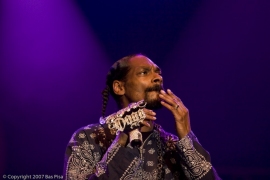 Then came the grand finally. Snoop Dogg. I never imagined that I would ever see this guy live. But I have to admit that he put down a hell of a show. The bad thing was the he also attracted a different kind of public which resulted in the fact that a very irritating boy jumped in front of me and started to wave with his hand as he had spasms. My luck was that my mate was able to get in front of me and took the most blows so I could finish my shots. Just 5 meters from the stage wasn’t a spot that we would give up easily.

If you want to see the other photos, just click on one of the above and you will linked to the gallery. In this gallery you will find the complete serie.