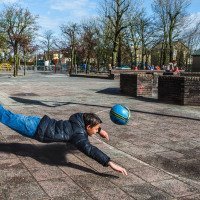 This entry was posted on Sunday, April 13th, 2014 at 20:43 and is filed under Kids. You can follow any responses to this entry through the RSS 2.0 feed. You can leave a response, or trackback from your own site.

For the third time this school year we (Ramona and me) started with the Kids Crea workshops and also this time we did a workshop on trick photography. And for the third time we had wonderful results and a lot of enthusiastic reactions.

Again six kids from the two highest groups were selected to participate in our workshop. As we did before we started with the floatation pictures and  it is fun to see how some subjects keep coming back in every workshop. For the boys it is all about soccer and for the girls it all start with dancing but 9 out of 10 times end in something else.

For me it is not about the subject but it is all about the path to the end result. The way they explore their creativity. And what is a better way than to do this with trick photography.

Orsi, Merit, Perline, Rob, Martin and Kay had the first afternoon to come with an idea and they had to figure out how to do it. So we started with drawing the setup and discuss the ideas. Not all ideas were possible, and not all the kids had enough inspiration to come with a good idea straight away, but at the end of the afternoon they all were ready for the next week.

So next week we brought the folding stools and tripods and started shooting as usual. Not all shoots went as planned and not all results were as expected. but that wouldn’t matter because we would always have the next two weeks to come up with a better shot.

And so we did. For the second part of the workshops I introduced a new technique (next to the floatation and ‘fun with a frame” tricks we did the last two workshops) We tried multiple exposure shots. A very old technique for trick photography but also a fun technique. Of course this can be done on two different ways.

Below you see all options on a row. 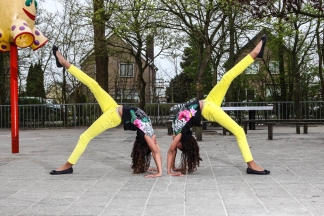 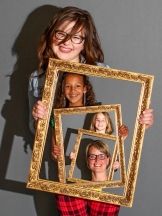 So at the end all the kids had a good trick photo and were Ramona and myself ready to start editing where necessary. As soon as I saw he first results I knew we succeeded again as a group and we would have something to so for at the crea exposition…..