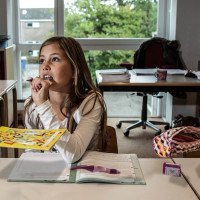 This entry was posted on Friday, October 11th, 2013 at 09:32 and is filed under Kids. You can follow any responses to this entry through the RSS 2.0 feed. You can leave a response, or trackback from your own site.

Previous: Video on floating with kids
Next: Video: Yoga-time 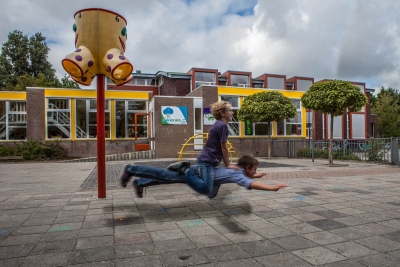 This year I had the opportunity to help at my daughter’s school (De Familie school) with what they call the creative afternoon. “Crea-middag” in Dutch. During four afternoons the kids will work in small groups on creative projects and in the end they will exhibit their work. How cool is that!

It wasn’t my intention to teach them how to photograph with a DSLR, nor how to make the perfect trick shot. That would be an impossible task and would be frustrating for all parties involved. So I had to come up with a different approach. After a while I had the idea to stimulate their creative way of thinking. A short consultation with the teacher who was responsible for the organization, and it was soon decided that I was hatching on a good idea and that we had to work with it as soon as possible.

Then the question arises. What should we do then? This all took time during the period that I had again picked up the floatation photos and I soon it became clear to me that this was the perfect match. Kids, floating, creativity, photography and workshop! 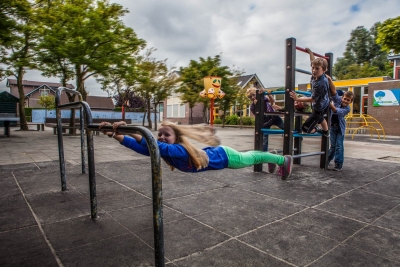 Because four days is a long time for six kids and one tutor, I came with the idea to let them work only on paper for the first day. (After they saw a short presentation on how to make a floatation photo). Just let their creativity do all the work for them. I considered this a huge risk but before we knew it, they were all thinking, drawing and ‘creating’. I was positively surprised by their creativity and the ideas they imagined. Of coarse some of them were a bit over the top (floating 50 meters above the ground, or climbing in a pole 20 meters to the top)

A weeklater, the second afternoon, I made one photo for each, based on what they had imagined and put on paper. During the shoots all the kids were each others assistants and extras. And giving each other tips and pointers. Before we knew it we made 6 photos in less then 90 minutes so we even had some time left to do a quick check on the laptop. It was so much fun to see how the kids responded when they saw the magic happen.

When I came home and started editing the six shoots I was even more surprised myself with the results. Most of the kids had a really nice floating photo. Darn, this created a new challenge. What to do next week? I always told myself that the general idea was to let the kids experience how you could improve the result by rethinking your original idea, weighing your options and learning from your mistakes. I considered that a hard task, looking a the ‘good’ results so far. 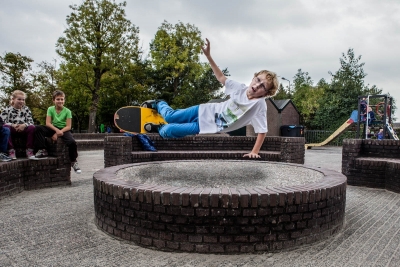 Being just bold I told the them on the 3rd day that we would start over and do it again. The same trick, the same technique. They were not really pleased with that at first. But after I explained what the reasoning behind that was they started again with putting their creativity on paper. Thinking and discussing how the next shoot would be was such a nice process. They all came up with a new plan and now how to prepare for next week.

Due to the fact that the plans for the second shoot were a little bit more complicated we had a much bigger challenge to get all six shots done in one afternoon. We just made it. Unfortunately we did not have the time to make a quick pre-selection on the laptop and have a little peak at the end result. It all came down to the final edit. So later that weekend I started to edit and to my big surprise there were some major improvements compared to the first shoots. Mission accomplished!

I can’t wait until the next photo workshop in january (they do one every semester). new group, new ideas, new challenges, and new results.

Thanks Nicky, Naomi, Pepijn, Sidney, Wesley and Sjors for the fun we had. And I do hope you guys enjoyed the photo workshops as much as I did!

For all the photos please click here for the gallery