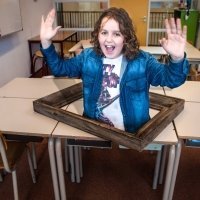 This entry was posted on Tuesday, February 18th, 2014 at 13:55 and is filed under Kids. You can follow any responses to this entry through the RSS 2.0 feed. You can leave a response, or trackback from your own site.

We started with  new workshop sessions for the Crea-workshops – Trick Photos. A new group of six kids exploring their creativity by being challenged to create a trick photo. We started with the same concepts as I did last time. A floating photo where the kids were challenged to come up with an idea to make a photo in which they were floating, flying or in any way not supported by the ground. And again they came with pretty cool ideas. For the next session we introduced a picture frame. So basically we use the same technique, but of course with a different outcome.

Luckily I had support this time form Ramona, she helped me with the kids and also while we were shooting. So some of the photos you see in the gallery were made by her.

The workshop consists of four afternoons, so this is the agenda we used

So we are not teaching them how to photograph nor how to edit the photos, but it’s all about being creative and using your brain to come up with ideas. And again I was surprised by the outcome, same as last time the kids were holding back in the beginning not knowing what to expect, but after the first results we noticed a huge leap forward in their way of thinking. So for the last session we actually had some spare time so we could edit the photos while the kids were still there. Priceless to see the looks on their faces when they saw the magic happening.

For me the second session was new as well and due to that fact I made some minor mistakes that caused me lots of extra work during the editing part, but at the end it cam all out good. It all came down to the way we were holding the picture frame to make the effect look real.

What kinds of trick photos did we create

It’s just a simple double exposure of kids on a stool (or chair, steps, or table) and a exposure of the area without the kids and the stool that was supporting them. With Adobe Photoshop the two images are combined in two layers and then the stool is erased. Some shades are added to complete the image and we are done

Again a double exposure (some shots require actually more then two exposures) The areas that we don’t want to show are erased so the underlying layer is shown, which gives the effect that you see on the right. As mentioned before you need to be aware of how the frame is being help otherwise the frame is for example showing from the bottom while you want to keep the upper part. We even combined the floating trick and the frame trick in several shots.

They all can be found in the galley here