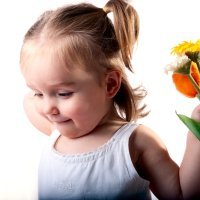 This entry was posted on Monday, March 29th, 2010 at 09:55 and is filed under Kids, Portraits. You can follow any responses to this entry through the RSS 2.0 feed. You can leave a response, or trackback from your own site. 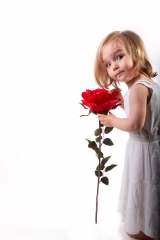 Shooting kids in the studio, always a challenge. But what a fun job to do. For both me as for my daughter Nicki.

This weekend I decided to do another shoot with Nicki. I had this idea of a High-key photo shoot combined with flowers. So for the preparation we went shopping for a nice white dress and some artificial flowers. I had the idea to use roses and thought it was to risky to use real roses because of the thorns. So we went for fake flowers.

Set up the studio with a white background, a soft box, a standard flash, and a hand held reflector. First we did some test shoots so Nicki could adjust to this new environment that suddenly appeared in her living room. 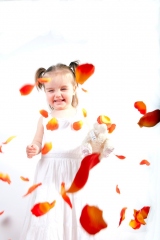 The moment she was comfortable in the new environment we dressed her up and let her play with the props. And what a fun that was.

After a while she understood that she could smell the flowers, or at least she could act that she was smelling them and we could even direct her into the right position (all I used was a small background (1,25 meters wide)) The moment she started to loose interest we gave her a new flower to play with and this worked really well.

Ad the end we even introduced a whole lot of fake pedals to play with. Or should I say to throw with. That was the moment the fun for her really kicked in.

Some tech info:
All photos were shot with my Canon 5D, 24-70mm USM L, on 200ISO. I had to do a lot of polishing in Photoshop due to the fact that the background was very small. And as a final touch I used Scott Kelby’s 7-point system to enhance the images. (Levels, LAB-colour trick, and contrast adjustments) Click here to enter the gallery