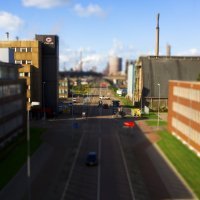 This entry was posted on Thursday, October 23rd, 2008 at 09:56 and is filed under Edits. You can follow any responses to this entry through the RSS 2.0 feed. You can leave a response, or trackback from your own site. 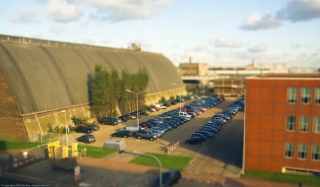 I read several tutorial about how to make ‘fake tilt’ photographs or ‘fake scale model’ photographs. And I decided it was time to try for myself. Also due to the fact that I still want to experiment with scale model photography and combine these with ‘fake scale models’ (looks like an interesting subject to play with).

So here are my first ‘fake scale model’ shoots. The whole idea is that you create an image that shows the viewer a scenery that looks like a scale model but is in fact a real scenery. 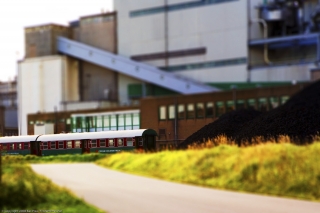 Just imagine that you combine these images with ‘real’ scale model photographs…. This will give you numerous options to play around with. You can mix reality with fiction and the other way around.

The pictures seen here were taken at the entrance of Corus Steel IJmuiden and I think I’m getting the hang of it. All it comes down to is taking the right picture (high viewpoint, scenery that fits model world, and awareness of disturbing objects in your scenery) and then a lot of tweaking and toying in Photoshop. How-to’s can be found at several sites on the internet (google on; ‘tutorial fake tilt’)

I am thinking about writing my own how to, but more about that later.