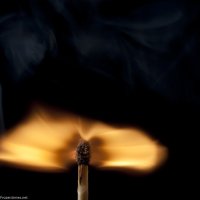 This entry was posted on Tuesday, December 23rd, 2008 at 01:17 and is filed under Experimental. You can follow any responses to this entry through the RSS 2.0 feed. You can leave a response, or trackback from your own site. 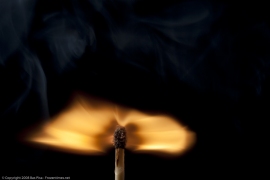 After the first experiments with smoke I thought it would be a logic step to also try fire. So while I still had my product table setup I placed some matches in front of my lens and was thinking about how to light them and make sure that I would release the shutter on the exact right moment.

First I thought it would be a good idea to use a heavy duty laser. I was able get my hands on a 100mW green laser. But unfortunately it was not powerful enough. It would make the wood of the matchstick smoke but it would not actually light the match. So I had to use a lighter. Light the match, remove my hand with lighter from the scene, and press the shutter. 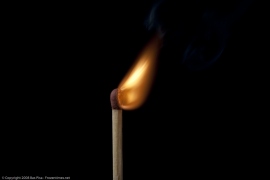 Light setup was the same as with the smoke experiment, with the only difference that I bounced the light from the opposite side where the flash head with barn doors and grid was located on a small piece of white paper. So hard light to make sure we will see the smoke and a small diffuser to make sure we get some softer light on the match.

Make sure you set the right shutters speed to sync with your flash and try to get a small diaphragm (f/22) so you get enough depth of focus (DOF). And then…. Just as with the smoke pictures. Shoot as much as you can and waste a lot of matches…