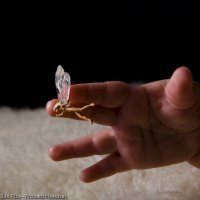 This entry was posted on Tuesday, December 16th, 2008 at 22:27 and is filed under Kids. You can follow any responses to this entry through the RSS 2.0 feed. You can leave a response, or trackback from your own site. 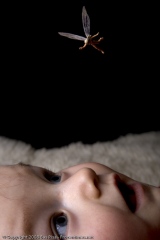 Not long ago I came to the idea to make a Christmas-card which involved our little baby girl. But before I would end up with the standard card, like a portrait with Christmas hat, or baby wrapped up as a present. I decided to try something else. I have been playing around with scale models. You know the little figures that are used on the model train tracks. And I came to the idea to create a Christmas cartoon. A little story that involves our little girl, Santa Claus, and little fairies.

How was it done? I set up a product table and my studio lights. Did some test shoots with just the scale models. And then we placed Nicki (our daughter) on a sheep skin on the table. By now she is getting used to the lights and starts smiling as soon as she sees the camera. 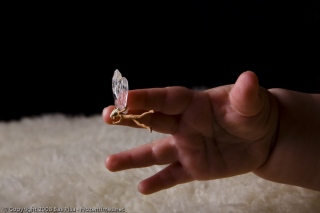 The little fairy was hanging on elastic invisible magic thread. This is something you can buy at any magic supply shop. And it is better than nylon fishing thread because it is elastic. So when something (or some little baby) pulls it, it won’t break.

Light was one single soft box and for the background I used a piece of black background paper which was taped to the table and the wall.

No photoshops edits or any other manipulations were needed. What you see is what you get….

Here are the first shots that involved the fairies. I thought the title was a perfect match.