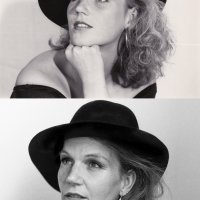 This entry was posted on Monday, October 13th, 2014 at 22:21 and is filed under Portraits. You can follow any responses to this entry through the RSS 2.0 feed. You can leave a response, or trackback from your own site.

Joan my wife placed an old photograph of herself on her facebook page. It was a model shoot she did 25 years ago. People started to discuss this shot and I came to the idea to remake it. Now, 25 years later.

It was a shot which I didn’t make myself so I had to think what was done, 25 years ago on analog film. It is not my type of photography and therefore it took me a while to figure out what happened. Tried to recreate the right contrast in Lightroom, then to Adobe Photoshop to get the shadows right (there were a few missing in my shot), then back to lightroom for the general tone. After that I used NikSoft SilverEfex to create the Black and White variant. Back again to Adobe Photoshop to remove some dust and wild hairs. Last but not least back to Lightroom for the final touch and crop. All with all a nice little project.

After several re-takes I think we got it. Judge for yourself. For us it was fun to do.

[Not a valid template]

[Not a valid template]