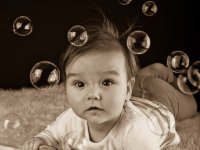 Still many ideas, but again, not enough time. While I was working on an idea for which I had setup all the gear, I used the opportunity to shoot some new shots of Nicki our daughter. I arranged a black background on the studio table and used two soft boxes. One placed on the right side, and the other placed in the front, high above. On the left side there is a window that produced a bit light from outside. It was a tough job due to the fact that the little lady moves around a lot more compared to a few months ago, and by placing the whole set on the studio table it was a bit risky. But at the end we managed. But the next time I will ask someone to assist with the little lady. I chose to make the images mono-tone (sepia) in Photoshop after I made them black and white, just because I think it adds more to the whole atmosphere. But that is a matter of taste. Click here to go to the gallery. [Canon 5D, 28-70mm f/2.8, 2 soft boxes]